That might not sound like much at first, but it’s a reversal of an 18-year trend that’s otherwise seen the number of UK businesses grow year after year, by 63% altogether.

It also follows on from the largest recorded decrease in UK business births, seen between 2016 and 2017 – a drop of 32,000 that was greater even than the effects the 2008 financial crash had on the birth rate of new businesses.

96% of all UK businesses are classed as micro businesses with fewer than 10 employees, so this downturn essentially signals a slowing of the nation’s startup sector.

We wanted to figure out what the root causes of these issues were, so we set out to discover what barriers were stopping potential UK startups from, well, starting up.

To help us get to the bottom of the phenomenon, we carried out a survey of 2000 respondents from across the UK. The results gave us a unique insight into what was preventing more people from getting entrepreneurial and going it alone.

The first significant finding from our survey was that 48% of people have seriously considered starting their own business. 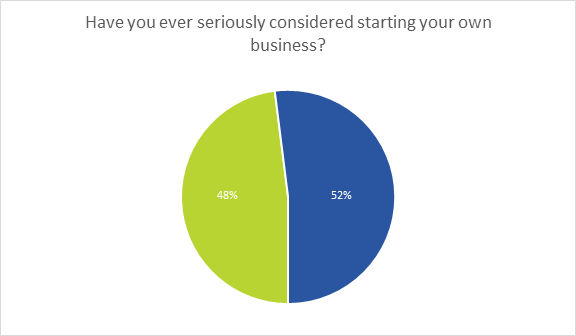 This was what we wanted to hear, but it raised the question: if so many people are seriously interested in starting their own business, why aren’t they doing it?

We presented our survey respondents with a range of potential barriers that might have stopped them from starting up a business and asked them to tell us which ones were a factor in them choosing not to go solo. This is what we found:

Across the UK as a whole, confidence-based factors were the biggest block to people beginning their own business, with 45% saying lack of confidence was holding them back.

The perceived initial financial costs of setting up a business were a close second barrier to startups, with 44% of people saying the expense would stop them from establishing a business.

In third place were skill-based barriers, with 34% of people saying they didn’t feel like they had the necessary skills to go it alone.

Health and wellbeing factors and general time constraints were least commonly seen as a barrier to setting up a business, but 28% and 27% of people respectively still said they were a concern.

These five categories were made up of even more specific barriers in our survey, giving us a better understanding of what exactly was stopping people from setting up shop: 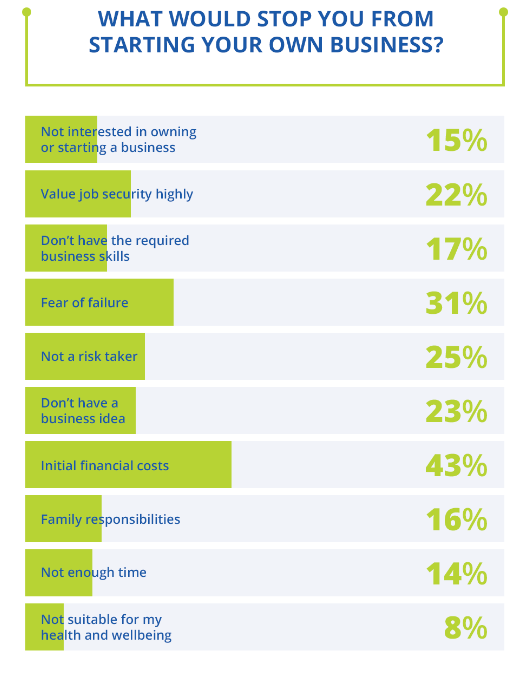 Out of the individual factors stopping people from setting up their own business, initial financial costs were by far the most significant, followed by fear of failure and avoidance of risk.

As interesting as the nationwide statistics were to us, we still wanted more detail, so we delved into the data and sorted it into regions.

This revealed what percentage of respondents from each region of the UK felt were the barriers holding them back.

The regional data gave us a great insight into where in the country people feel best equipped to set up their own business, as well as where people are most pessimistic about their chances.

East Anglia topped the confidence charts, with a relatively low 41.7% of respondents from this region saying that confidence would hold them back.

On the other end of the scale, 50.6% of people in the North East lacked the confidence to set up their own business.

Respondents from Wales felt they had the fewest barriers to starting up a business, with the least doubt about their skills and the problem of initial financial costs out of every region.

Unsurprisingly, Londoners revealed they just didn’t have the time to go into business alone, with 34.9% of respondents saying this was a barrier for them compared to only 21.9% of West Midlanders.

We also asked respondents some other questions to get a better understanding of their thoughts about starting up a business.

One of these questions asked what they thought running their own business would be like, and the results showed some common opinions about what it’s like to be a business owner: 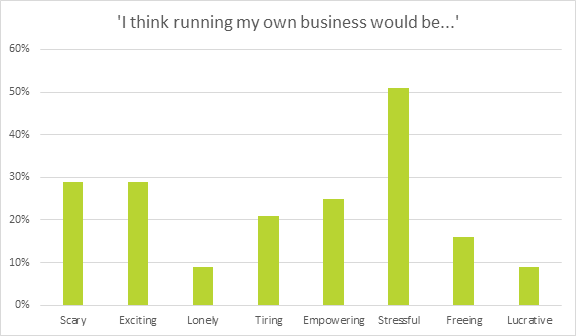 Over half of our respondents thought that running their own business would be stressful, while just over a sixth thought it would be freeing.

We also asked our respondents how much they thought it cost, on average, to start a business, trying to understand if they were overestimating the financial costs: 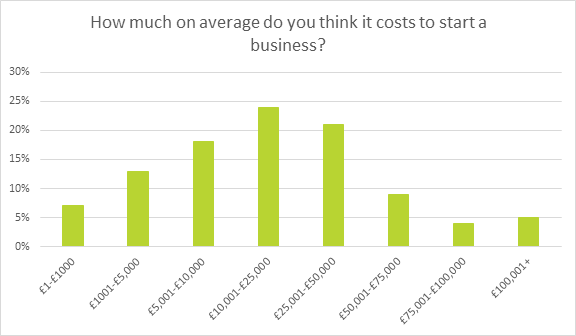 We’re passionate about SMEs and the positive effects they can have on the economy, so we didn’t like hearing that so many people felt that there were barriers standing in their way.

To help try and address some of the biggest concerns that prospective entrepreneurs have about starting their own business, we got in touch with some successful business owners and asked them some questions about how they managed to get going.

How did you overcome low confidence or fear of failure when starting up your own business?

‘We did thorough research to be sure we knew as much as possible about our market, our potential business, and our competitors. We set attainable goals – e.g. in our first six months if we can run three successful events that make a profit, that’s enough.  We made sure not to overstretch ourselves in the first few months – we took it step by step and allowed ourselves to learn as much as possible as we grew.

Also, we were realistic. Sometimes we would simply say ‘If this doesn’t work, what’s the worst that can happen?’. You’d be surprised how much that can help!’

‘The best way to gain confidence is to look for small victories that signal progression, for example, when your website is finished, when you make your first sale, or the first positive response to your product.’

What kind of funding did you manage to secure to raise the initial financial costs of your business?

‘My funding consisted of only a few hundred pounds. A friend helped us a lot with the design of the website so that saved us quite a lot of money, and all our marketing in the beginning was just good old hard work and any free methods we could utilise.’

‘We worked hard to keep our costs as low as possible. We leased IT equipment and software, we didn’t hire staff initially, we worked from home to reduce office costs, we negotiated fees with venues and suppliers.  As a result, we managed to start with a minimal investment of just a few thousand pounds from personal savings.’

Did you ever feel like you were out of your depth in terms of the skills required to run a business?

‘I constantly did and as mentioned suffered massively from peer pressure. I genuinely did lack some skills and attributes, but I managed to realise that and overcame it by hiring people with those particular talents. The old adage applies, ‘if you are the smartest person on the payroll, then you have got your recruitment wrong’

‘In the early days when a client would ask for a specific kind of tax invoice or ask me for my business address, I felt that creeping sense of playing above my station. But luckily a combination of Google and friends who are running their own successful businesses meant I could usually muddle through. Now, there’s not much that phases me.’

Do you have any other advice for prospective business owners that might help them on their journey?

‘Surround yourself with a community of entrepreneurial people involved in similar ventures. If you don’t know people, join a coworking space or sign up to a course. Failing that, there are some great entrepreneurship community groups on Facebook. The point is, you will need support, praise, sympathy, someone to vent to, someone to answer your stupid questions and someone to hold you accountable.’

‘Be humble and be prepared to admit your mistakes early on. Pride and persistance can lead you down the wrong road for longer than you need to. Everyone make mistakes, the key is recognising it as early as you can.’

‘I would say that the only thing that really matters when starting a business is to go all in on it, 100% effort and focus. If you truly commit yourself to your business and keep pushing every day then it is amazing how quick good things start happening, and before you know it you can end up with a really successful operation on your hands.’

‘The best thing you can do is just get stuck in. Just make sure you are not taking any huge risks and try and have some funds stashed away should you ever need them.’

‘It sounds like a cliché but believe in yourself. There were definitely moments when we were starting up where we thought we might have made a mistake, but we couldn’t afford to think like that – and turning fear into faith was the key to us powering through the difficult times and getting us to where we are today.’

‘Too many people don’t start a business as they can’t think of a unique idea, or they end up dreaming up something too niche in an effort to stand out, but there is no actual demand for that service or product so it’s essentially a doomed venture.

There are opportunities all around you, businesses and industries that you can replicate and improve upon – an idea does not have to be unique.

You should see established competition as lazy and complacent and take great pleasure in disrupting the successful thing they have going.’

These responses from successful business owners, who were once in the same position as the 48% of people in our survey who have wanted to start a business themselves, provided some great bits of advice which can help you to start out alone.

Almost all of the business owners we spoke to said that they had suffered from low confidence and fear of failure in the beginning, but that planning, setting milestones, being positive, and staying realistic all helped.

They were all also honest about their shortcomings in various skills required to run a business, from appearing professional to sending an invoice. However, they almost all agreed that a lack of skills is normal – you can’t be a master of all trades – and that there are easy ways to get around knowledge gaps, from using Google to hiring intelligently.

In terms of startup costs and funding, the business owners we spoke to had a variety of experience. Some started with nothing, keeping costs to an absolute minimum in the early stages and using personal savings as funding. Others had more substantial startup funds, but still relied on negotiation and networking to keep their costs low.

All of the research, analysis, and thought that went into finding out what’s stopping startups from starting up gave us one solid conclusion:

There are a huge range of barriers that potential entrepreneurs are worried about hindering the start of their self-employed journey, but every entrepreneur has felt the same concerns at some point.

Find a way to combat your lack of confidence, get creative with cutting costs, and don’t worry too much about your skill gaps, and you’ll be in a better place than most when it comes to starting a business.